E. Amaldi Foundation was founded on the 28th of March 2017 by the Italian Space Agency and the Hypatia Research Consortium as an ambitious project that wants to propose a new way of interpreting applied research and technology transfer in support of the national scientific heritage.

The primary objective of the E. Amaldi Foundation is to promote and support scientific research aimed at technology transfer, starting from the space sector, as a fundamental tool for the country’s economic development and as a source of innovation for improving competitiveness, productivity and employment. The reference model to which it is inspired is the German Fraunhofer Institute, absolute excellence in technology transfer and applied research, which in over sixty years has made a decisive contribution to the technological growth and development of Germany.

The Foundation sees the participation of private and public subjects aiming to be a virtuous experimental model in which the public contribution is lower than the private one, a best practice of the public-private partnership that has the aim of making this same model repeatable also in others sectors in addition to the space one.

We want to develop and make available for everyone applied research results coming from public and private actors, as we also carry internal research activities. We try to do things differently from others before us, and we share the skills and the  know how  we acquire.

We are strong supporters of Open Innovation  and for this reason we act as accelerators for all the players operating in the field of technology transfer or are interested in speeding up the process of acquiring innovation.

We contribute to create a world in which, at competitive costs, companies acquire innovation by expanding their network and foraging research. This is why access to the Foundation will always be open to companies, research institutes and anyone who shares its scientific, economic and social objectives.

We count on the participation of private and public subjects, and we aim to be a virtuous
experimental model in which the public contribution is lower than the private one, a best practice ; of the public-private partnership that has the objective of making this same model repeatable also in other sectors besides the aerospace one.

We aim to develop and make available for everyone the results of applied research, produced by different public and private actors, rather than producing internal and proprietary research activities, following the model of the Fraunhofer Institute. 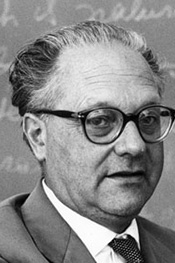 The Foundation bears the name of Edoardo Amaldi, a man whose ethical values and foresight on the role of science have left a strong mark on history.

Edoardo Amaldi has always proposed science and knowledge as instruments of union, civilization and growth for civil society, up to the commitment in organizations of scientists for peace and disarmament, which materialized in his decisive contribution to the birth of CERN and INFN and the European Space Agency. Amaldi was part of the Via Panisperna boys, the study group which, led by Enrico Fermi, obtained fundamental results in the physics of the atomic nucleus, crowned in 1938 by the award of the Nobel prize to Fermi.

For over 40 years he has held the chair of Experimental Physics at the La Sapienza University of Rome. For his contributions in this discipline he is considered one of the preeminent figures of Italian physics in the second half of the twentieth century. Edoardo Amaldi was also an affirmed benefactor and humanitarian. He in fact adhered to the Pugwash Conferences on Science and World Affairs, the movement for the dismantling of nuclear weapons and to ISODARCO (International School on Disarmament and Research on Conflicts).